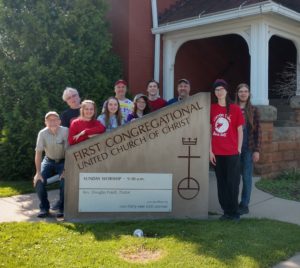 It is Saturday Morning, June 15th. After a good night sleep, we found out who’s air mattress stayed up and who’s didn’t. After having breakfast, cleaning up, and taking a group picture, We left the church about 9:30 a.m. We stopped at a sculpture place called world of Dr Evermor. Here is the website http://worldofdrevermor.com/. They had lots of cool sculptures. 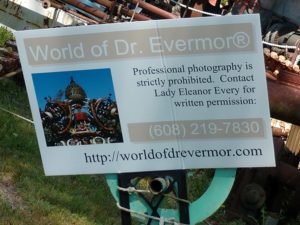 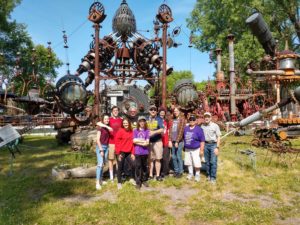 We got rain in Belvidere, IL to Angola, IN.
After being on the road for a while, we stopped at Walmart to get a few things (like an air mattress or two). We were going to get food to cook out for lunch but it was raining too hard and we stopped at Chipotle for lunch. Then we were back on the road. 2 miles down the road one of the Youth stated that they left their bag at Chipotle. So one of the vehicles went back to get it.
We all finally arrived at the First Congregational Church in Angola, IN at 8:45pm. It stopped raining by the time we arrived there. John and Joe are going to get pizza for supper. That really sounds good after a long days drive. The Youth have their beds set up for the night and are playing hide and seek, while waiting for supper to get done. The next time you see Pastor Glen at church ask him about Banana Math.