My name is Maddy, I’m a junior at the University of Minnesota where I study dance. Last summer I was part of a program called Summer Communities of Service which brings together young adults to work at churches and nonprofits across the United States. These sites are selected by organizers in the United Church of Christ and Alliance of Baptist Church. During 2019, sites included a children’s summer camp in the mountains of Montana, a Christian garden and community center in North Carolina, a housing nonprofit in Florida, and my site, churches in Philadelphia.

We started off the summer with a group meeting in Florida where we met each other and discussed an improvisational “yes and” approach to community service. In summary, we talked about creative ways to interact with youth that we would encounter in our service and discussed the importance of learning the specific needs of the communities we were going into in order to serve in a way which was truly beneficial for them.

Shortly thereafter, I went to Philadelphia to meet my sponsor and learn more about my specific jobs there. My sponsor, Dr. John Harris was pastor to Mount Paran Baptist Church and a leader in various groups and organizations connected to the Baptist church including a seminary and a summer camp. With Dr. Harris, I was able to do behind the scenes work. I designed posters, created forms, did basic research, and performed other administrative tasks to support the ministry of these groups. This made me appreciate all the time and effort that leaders in the church put in to organize its everyday existence and events. Dr. Harris was one of the busiest people I met and I was happy to support his work though I won’t pretend that formatting papers was the most exciting job that I’ve had.

I ended up spending most of my summer working with another church, United Missionary Baptist Church. This church was in a neighborhood close to downtown Philadelphia, in walking distance to the art museum. The neighborhood was in the process of change as it dealt with an influx of people and the forces of gentrification. United is a beautiful example of how the church can worship God and intentionally care for its members and its community during times like that.

The congregational was African American and followed worship traditions based on the culture of the black church. We sang call and response gospel songs. The voices of the lead singers and the playful piano and drums blared loudly through the speakers. There was no way you could fall asleep during one of United’s services. The congregation participated throughout service, calling back at the pastor and embodying their worship by dancing and running around the church. Their energy was amazing and inspiring. The first service I attended was a revival, an extra enthusiastic service meant to revitalize the members of the church. I did not know what to expect and it was one my first nights in Philadelphia. The service was supposed to go 1.5 hours, but it had everyone so excited that we kept going for 2.5 hours. By the end I was exhausted, but moved and excited for the coming summer.

I did most of my work at United with youth at the church. I helped with their children’s church which met during the sermons. We read Bible stories, sang, and did crafts in order to engage the imagination of the kids and help them start thinking about how the Bible can apply in their own lives. I also did some other summer activities with the kids like a day at the pool and a trip to see the Lion King. It was great to witness them building community among themselves and to hear them processing Christian lessons.

I also worked closely with Dr. Chandra Williams, the pastor of United. Together we brainstormed ideas for activities and events which would increase participation in the church and the health and involvement of its members. United has a multi-generational congregation so we discussed how best to serve each group and how to build relationships between members of different ages. I mainly helped develop some ideas about college ministry and began the process of contacting nearby universities. Although United did not currently have any college students attending, they are located close to several large universities so I was able to provide my insight as a student to form some ideas for the coming school year. We also worked on ways of reaching out to the community by visiting local businesses to see how we could support them and they could support our members. We also held community events such as an outdoor summer cookout to invite community residents to come so that we could get to know them and hear their stories. Witnessing the caring outreach and passionate planning was exciting. I did not get to see all of our ideas and dreams come into place (and I am sure that not all of them will), but it was encouraging to think about all the possibilities the church has to build supportive, fun communities and to know that there are a lot of different ways in which we can try to do that.

I was also introduced to liturgical dance while I was in Philadelphia. The church had a dance ministry of 4 other young adults who practiced each Sunday and performed about once a month. When they heard that I loved to dance, they graciously let me join them. It was an exhilarating experience! Between the expressive movement and the improvisational space in which we embraced the influence of the Holy Spirit, it truly felt like a communal act of worship in which we were in conversation with each other, with God, and with the congregation. Some of my favorite memories from Philadelphia are dancing in front of the church as members reach towards the sky and call out to us. 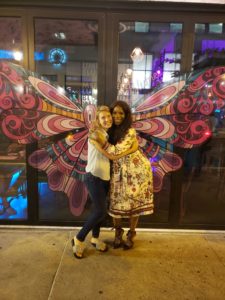 Lastly, I want to mention my experiences living in Philadelphia because I think God ministered to me in unique ways outside of my work. I was supposed to be living with at least one other intern and I was supposed to have a permanent housing situation, but that did not happen. I moved between hostels and the houses of church members, shifting about once a week. It created a bit of uncertainty and loneliness (as I would often leave the people I met when I moved) and led to me dragging my stuffed suitcase around downtown Philly a few more times than I would have liked. But in the end it was such as a blessing. I met so many new people from so many different places and was inspired by their generosity and their openness to share their stories. I made best friends with my spiritual mentor’s four year old granddaughter. I visited the art museum with a world traveler and heard about many of her adventures. I shared dinner and conversation with people at the hostel and shared my story of my summer service with a lot of people.

Though in many ways Philadelphia was not what I expected it to be, I am so glad that I went. When I was leaving, I received a message from Dr. Harris. I had not been able to say goodbye to him, but I almost teared up when reading his thank you for my work amidst a sometimes uncertain situation. His message ended with Hebrew 6:10, words that I would like to leave with you. “For God is not unjust so as to overlook your work and the love that you have shown for his name in serving the saints, as you still do.” This reminded me that God oversees all the service we do, be it something little like making a poster or something bigger like helping organize and run a children’s day. Our work is dependent on the love that we receive from Him and is part of His much bigger plan. He sees what we do, He helps us, and He loves us.