COVID-19 Statement - Please join us for in-person worship each Sunday at 9:30 a.m.! When you enter the building, we ask that you please wear a mask if you are unvaccinated or vaccinated and sign in. During the worship service we will be socially distanced. Recordings of our Sunday worship service can be found on the First Congregational Church - Cannon Falls YouTube Channel posted each Monday. To keep everyone in our church and as well as our wider community safe, we are still closed to larger public events until further notice. 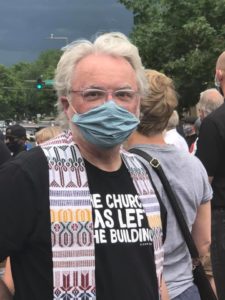 Marching with Twin Cities Clergy in Saint Paul on Tuesday, June 2. It was a silent march, because too many words have been shared and lost. Black pastors led; white pastors followed, because we have their backs. Friends and family followed. The march ended in the parking lot of the Target on University Avenue that was looted on the first night of rioting in St. Paul and is now closed and boarded up. There, prayers were offered for the city and all its citizens, that justice might come and a new peace might be born, a peace we have not known, a peace for all and not just for some.

Worship
In-person service on Sundays - 9:30 AM. Services are recorded and posted on YouTube and the website within a few days.
Office Hours (Secretary)
Tues & Thu 10 AM - 3 PM
Pastor
Rev. Grace Anderson. Call for hours: (507) 263-2901 or see the Calendar link on the website