Happy Easter! Welcome to our Virtual Service for April, 2020.  Before you start, click on the links to download the hymn to sing along with Dawn and the scripture reading to follow along with Pastor Glen.

Christ the Lord Has Risen Today

“The Ten Commandments” was broadcast last weekend, and will be again on Easter eve. It must be a law that at least one of the networks is obligated to do so every year at this time. It is quite a production, the very definition of ‘epic.’

It solidified Charlton Heston’s career; he got to play Moses and God (he voiced God when God speaks to Moses out of the burning bush; there’s some disagreement about who voiced God when Moses was given the Ten Commandments.) It saved Edward G. Robinson’s career; this was his first big role back after he’d been blacklisted under the McCarthy hearings. It was Yul Brynner’s favorite movie role, and, according Heston, his best work. Anne Baxter and Yvonne DeCarlo were paid very little for the work, but didn’t mind; they wanted nothing more than to appear in Cecil B. DeMille movie. Same for Vincent Price, who felt you weren’t truly a movie star until you appeared in a DeMille movie.

I watched it multiple times as a child, and even saw a re-release in a local theater. It is a great adventure story, especially with the liberties taken by the screenwriters and director. I was always, and still am, quite horrified by the depiction of the death of the Egyptian children by the Angel of Death, the final plague that convinces the Pharaoh to let Moses take the Hebrew people out from under slavery in Egypt. It’s one thing to read it; it’s another thing to see it portrayed in all its mercilessness on the big screen.

But that is the origin of the annual celebration of Passover, when observant Jews today remember their ancestors being brought out from slavery to freedom as the Angel of Death “passed over” their homes, sparing their lives, demonstrating the power of God and prompting the Pharaoh’s change of heart. That’s why Jesus was in Jerusalem when he was arrested before his execution, to celebrate Passover. It was a time of Pilgrimage, when faithful Jews from all over came together to celebrate in the city and at the temple that gave them their identity as the people of God. The Passover meal at the heart of their celebration is the very meal we remember when we celebrate communion, what we have come to call the Lord’s Supper.

The annual pilgrimage for the Feast of the Passover was why there was such a crowd when Jesus rode into town on what we now know as Palm Sunday. Yes, his reputation preceded him, but only to a point. The fact that he rode in on a donkey was a bit of street theatre that even those who did not know him would have recognized. Kings and triumphant warriors would ride into town dressed in the most impressive robes or military uniforms, in a triumphant display of power. Jesus came in on a lowly beast of burden, dusty from the road. The people, resentful of the heavy-handed rule of Rome, would have understood the mockery of Rome’s power Jesus was making.

Marcus Borg and John Dominic Crossan say it this way: What we often call the triumphal entry was actually an anti-imperial, anti-triumphal one, a deliberate lampoon of the conquering emperor entering a city on horseback through gates opened in abject submission….the most unthreatening, most un-military mount imaginable: a female nursing donkey with her little colt trotting along beside her.

The crowd was shouting “Hosanna,” as they waved their palms, the Gospels tell us. Hosanna does not mean, “Hooray for Jesus! Our team is winning!” Hosanna actually means, “Save us!” It’s a cry for help, a prayer for holy intervention.

It’s been a strange season for us already. Maybe our observance of Holy Week can give us a new perspective on the events of Palm Sunday and these days and hours before Easter. That parade was a lark, an adventure. But then it got serious, very fast. Things changed quickly, from laughter and shouting to an arrest and then a crucifixion. We are faced with isolation, uncertainty, and loss – and a growing number of deaths, even among these we might know. I’m just saying things do change quickly when the public health is at risk from a virus we don’t fully understand, some don’t still believe is real, and those we should be able to trust don’t agree with each other. So we do our best. We want to, and should, join in that prayer, Hosanna! Save us! And then find ways to join in God’s answer to our own prayer.

So let’s see what lies ahead. What Easter will mean for us this year, as we celebrate in a different way? Let’s look for signs of hope and resurrection, where God is among us, how the Spirit is present in saving acts, where the Risen Christ is being made known. It may not be celebrated in a family meal or the joyful choruses of our morning worship together. But God is present. Always. There’s no stopping resurrection. We just need to look for it in new places, nurturing it new ways. Opening our hearts to it in new ways. 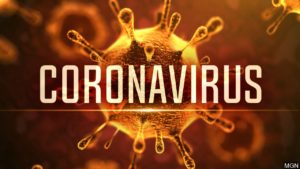 I have been thinking the last few days…… During this time of this wide spread COVID-19 Virus throughout the US and the World, brings me back to the time of Moses in Egypt where the Israelites were forced into slavery to make bricks from mad & straw to build Pharaoh’s City. Then God sent Moses and Aaron to tell Pharaoh to “Let His People GO!!!” But Pharaoh would not. Then God send the Plagues to Egyptians namely the plagues of the First Born. God had commanded Moses to tell all the Israelites to put Lamb’s Blood and put it around the Door (on the 2 doorpost(sides) and the lintel(top)) and STAY Inside. Then the Plague would buy pass that home an everyone in the home would be safe.

The last 2 videos that Pastor made for the website talk about how Lazarus had died and then Jesus told them to remove the Stone from the tomb and Jesus Commanded Lazarus to COME FORTH!! And He did.  Lazarus was no longer dead, but He was ALIVE!!!

The Fact that this Scripture comes during Lent, got me thinking. I have heard this Scripture many times, but never got me thinking like this before. Maybe it is that back in the time of Moses the Israelites had to stay in their homes with lambs’ blood on the doors to save the lives of the 1st Born. Or it is the fact the Lazarus was dead for 4 days before Jesus got to the Tomb and commanded for Lazarus to come out. Or is it the fact that we are in the middle of our own Lenten Season with this Plague, I call COVID-19. Keeping us in our homes staying away from loved ones or the things we love doing that is getting me to think and think hard about the folks back in the Bible. I see How GOD can use anyone of us to do his work in no matter what skill level we have or think we don’t have.

During this Lenten and COVID-19 time, I see a picture of when this is all over we are walking out our doors like the Israelite from that last Plague of the First Born and Lazarus did walking out of the Tomb after being dead for 4 days, thanking God for being with us ALL Through it all. I’m not saying that God Put this COVID-19 Virus (The Plague I call it) on us, but we can use it to grow in his Love and get closer to him and be kinder to others and not to take thing for granted. As Pastor Glen stated in one of his Videos. “The church on Sundays is not our Ministry, but the results of our Ministry’s outside of our Church.”  The way I look at things we don’t need to be in Church Building to have Church. We can have Church anywhere we want and have as many or as few of folks there. I even caught myself pulling out my Bible more and praying more for other’s needs then my own wants. I look at our Lives are to be walking Ministry of Christ and showing others Christ’s Love for them.

Don’t get me wrong …. COVID-19 is NOT GOOD!! With Folks getting very sick and dying. But, maybe this COVID-19 isn’t as bad as it could be If people start thinking about getting their lives right with God.

Meditation on John 11:38-44. Jesus calls Lazarus out from his tomb. And calls your pastor out. And calls us all out, to where we can be living, even when we are living in isolation. 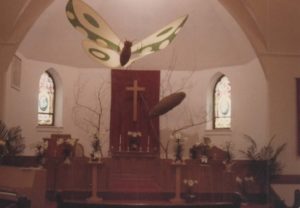 The other day my mom (Carol Nelson) was going through some old pictures to give to us kids. She came to a few pictures from an Easter celebration at church back in the early 1970’s. The decorations are a butterfly and its cocoon. 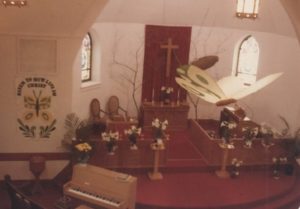 I kinda remember it, but I am not sure what year it is. In any case, I wanted to share these great memories with all of you.

Adult Christian Education
10:45 AM (except last Sunday of the month)

To keep everyone in our church and as well as our wider community safe, we will be cancelling all public events and services until further notice.

Please call ahead before stopping at the office.  Pastor Glen will be available by email and phone.